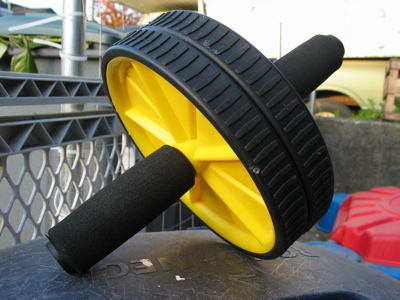 You’ve seen the infomercial.  A guy or girl on their knees holding handles on either side of a wheel rolling forward and back up again. Yes folks, it’s an Ab Wheel

(Not to be confused with the ab roller for crunches). This piece of fitness equipment has been around forever, with many incarnations of it. Double wheel, single wheel, resistance coil in the wheel….There are so many of them on the market these days, it’s so hard to decide which one to get. But, hold on to your horses, let’s find out what it does and how well it does it and then you can decide, whether or not to get one or make one. We’ll talk about making one later on.

Claims The generic claims of all ab wheels, are that they can help you lose fat on your tummy as well as strengthen and tone your abs, back and arms. But the big promise seems to be getting those “six pack abs”.  I mean, I much prefer a six pack (hell even a four pack) to a keg, unless it’s beer. Who doesn’t? Read on…

Truth Before we go looking at studies, let me tell you, it is impossible to spot reduce fat. I’ve ranted about this in a number of posts. You lose fat everywhere not just one place. You can strengthen and build muscle in a particular area, sure thing, but not target fat in that area. If you want to see those abs, then controlling what you eat is the key. Most battles are won in the kitchen.

Fine, what about core strength? One study compared the Ab Wheel against the FitBall, Ab Roller (assisted crunches), and regular crunches.  EMG was used to measure electrical activity in the muscles of the Rectus Femoris (quads), upper and lower Rectus abdominis (abs), and the External Obliques. The results showed that both the FitBall and the Ab Wheel 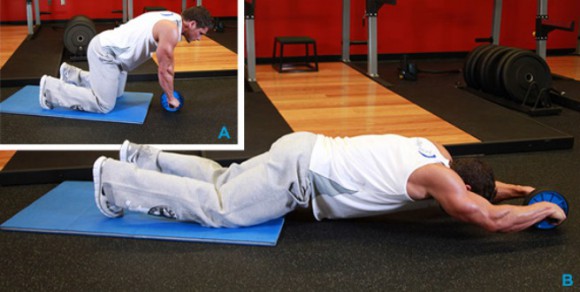 Okay, now what about the lower back and arms? Well, there are no studies that I have found showing the impact on anything else. However, if we look at how the exercise is performed, rolling out from a kneeling pushing and pulling back up, you definitely need to engage muscles of the lower back and shoulders to complete the exercise. The further out you roll, the more difficult the exercise becomes. You definitely will require more core strength if you do it without knees on the ground, in a jackknife motion. There are more complex exercises you could do to make it more challenging and you can even trap it to your feet and roll the feet back and forth (jackknife).

Bottom line It can be a good addition to your exercise routine to help build overall core strength. If you’re not very athletic, don’t roll out very far on your first try, build up to it as you get stronger. Save the “no knees” for when you’re a little more advanced. There are other exercises you can do to strengthen your core also, such as planks and even push-ups, that require no equipment. Maybe, start with these and then graduate to an Ab Wheel for variety. As promised you can make one…Just take a piece of PVC and put it through some sort of wheel (wheelbarrow wheel) and voila…ab roller. Sure it’s basic, but it’ll do the trick. If you want to buy