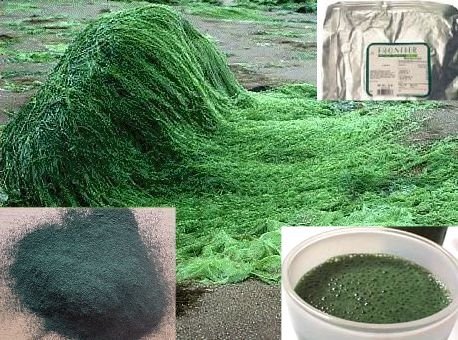 Spiru…Who? Spirulina, yeah you heard (read) right. Before we get into the health benefits, how ’bout we get into what it is. Spirulina (Arthrospira) is a cyanobacterium …eh?…jeez, english pleeze! In layman’s terms, they are a type of bacteria that derives their energy through photosynthesis (Somewhat controversial…please don’t ask, just look it up). Grown worldwide and used as a dietary supplement or whole food, this “algae” (that’s what we will refer to it as) is found in tropical and sub tropical lakes and ponds. It has many supposed health benefits and surprisingly high protein content (and it’s not even an animal source). Lets explore a little further and see what makes this algae so special.

Look at that, this is way more protein than chia seeds and quinoa combined….that’s almost 60% by weight! In fact this is the highest protein content of any food source, meat included.  It also provides all 8 essential amino acids and then some. Now there are a host of micronutrients which truly make this a superfood that may contribute to a slew of amazing benefits. Let’s look at some of them.

Inhibits HIV response In studies conducted in HIV infected patients it was shown that spirulina has the ability to increase antioxidant activity  in the body, help with weight gain (due to protein) and in some cases act as an antiretroviral which reduces the viral load [1, 2, 3]. In one lab study, an aqueous extract of spirulina was able to inhibit production of HIV-1 and showed promise for future clinical trials [4]. It should be noted that most of the studies on spirulina are in the early phase. More long term and in depth research needs to be undertaken to determine the mechanisms at work, before spirulina can become a part of HIV treatment.

Combats Rhinitis Spirulina has been investigated to determine effects on inflammation of the mucous membrane in the nose due to allergy. Studies have shown when administered it is able to reduce nasal discharge, sneezing, nasal congestion and itching [5, 6]. Although the exact mechanism by which this occurs is not clear, it’s still worth trying next time you have a sinus problem. See if it works for you.

Helps with arsenic poisoning Okay, this one may not affect us here in the U.S., but in some countries such as Bangladesh, India, Taiwan, and Chile consume large amounts of arsenic through their drinking supply [7, 8].  Treatment with spirulina extract in research showed improvement with respect to melanosis and keratosis due to arsenic poisoning [7].

Anti-Cancer and immune system enhancement In one study done on human pancreatic cancer cells, spirulina was shown to reduce both the growth and spread of the cells [9]. This study was not done on humans, but cancer cells in a lab. Similar observations were made in other research with spirulina and cancer cells [10]. In other studies, spirulina was shown to increase white blood cells and enhance or sustain immune function and give protection against bacterial and fungal infection [11, 12]. Those studies was performed on mice. Whilst showing promise as a treatment in the fight against cancer and enhanced immune response, as with everything so far, more studies need to be conducted which include people and not cell cultures and mice. Although the promise is there, not enough research has been done to concretely determine the anti-cancer and immune enhancement benefits of spirulina.

Side effects It has been suggested through mostly anecdotal evidence that spirulina can cause temporary fever, sleepiness, passing of gas and itchy skin. This is said to be temporary and spirulina should be safe for consumption in healthy individuals.

Summary There are other suggested benefits for using spirulina that I came across, but the evidence in favor off them are so slight, I just don’t think it’s worth even mentioning. Spirulina is definitely healthy as a food due to the high protein content and low sugar levels along with a healthy dose of antioxidants, iron and zinc. Try it and see how you feel. If you do, please leave a comment and let us know what you think. Remember to like and share on facebook.

Spirulina photo was taken from http://www.truthinsideofyou.org with CC-BY-2.0 license.