I usually refrain from doing pure opinion posts. I do inject my thoughts into articles, after I’ve presented both sides of an argument, with links to the sources cited. No apologies for that.  I have an opinion too. But pure opinion pieces, I tend to avoid. Why am I choosing to do it now? Well, I’ve grown tired of people hijacking movements, misrepresenting the original ideas behind them, and in the process, perverting them. Especially, when you’re in a position of influence, and doing more harm than good.

Let’s take the body positivity movement. First I’ll give a little background on it and then my issues with it, or some people who hide behind it, like Tess Holiday and Sonalee Rashatwar. Let’s be clear, no one should shame anyone for what their bodies look like, whether obese, skinny, discolored, scarred, or otherwise. Nor should you be ashamed of yourself, for so called imperfections. I’ll repeat this statement throughout this post, for the “righteous anger” people, who will choose to misinterpret what I say, just to have something to rail against. Maybe they might get the point by the end of the post, if they make it that far.

What is the Body Positivity Movement?

The movement is based on the idea that all people should have a positive body image, regardless of being fat, skinny, scarred, etc. In general positive, regardless of any perceived imperfections, as defined by society. You should accept and love yourself period. That in a nutshell is what the movement is supposed to be about. 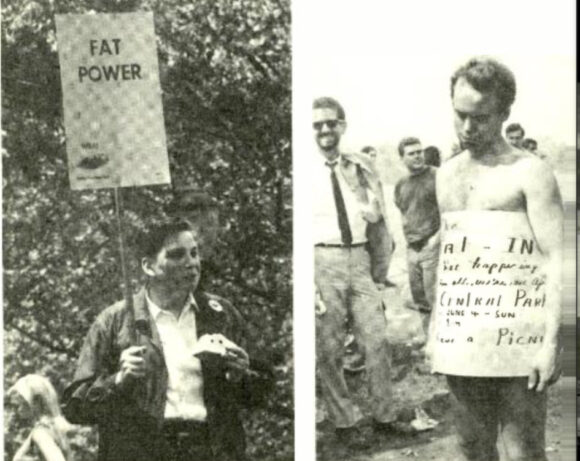 And I’m all for it. Now, how did it all begin? The movement has it’s roots in the “fat acceptance” movement which has so far occurred in 3 waves.

The first wave In 1967, a “fat-in” was organised by radio personality, Steve Post, in Central Park. Post, was reported as saying, the gathering “was to protest discrimination against fat.”  About 500 people showed up, 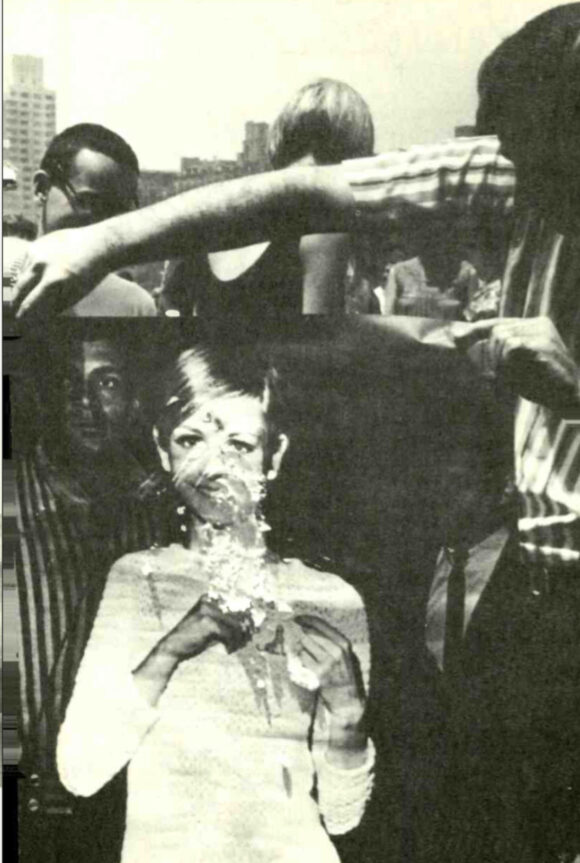 protesting fat oppression and burned images of Twiggy (Supermodel). Several months after the gathering, an author by the name of Lew Louderback wrote an essay entitled “More People Should be Fat!”  This was in response to discrimination his wife experienced as a result of her size [1].

The combination of events inspired the formation of NAAFA (The National Association to Advance Fat Acceptance). The movement’s goal was to  change the dialogue surrounding obesity and health, and spread awareness of the distinction between being fat and being unhealthily obese [2].

The second wave This was built on the foundation of the 1st wave, and came about in the 90’s. The fat acceptance/body positivity, 90’s movement included to some extent, the idea of giving people of all sizes, a place where they could comfortably come together and exercise. There was a greater focus on  programs specifically for overweight people. Popular programs included, “Making Waves” which was a weekly fat swim, and  Genia Pauli Haddon and Linda DeMarco’s home exercise video series “Yoga For Round Bodies,” among others [1].

The third wave The 3rd wave covers the 2000’s till the present. This wave now includes plus sized models and feminists like Instagram influencer, Tess Holiday. Another group grew out of the movement to include all manner of body acceptance (body positivity) and isn’t specific to fat acceptance. So if you’re skinny, fat, have stretch marks, discolorations, imperfections, loose skin, scars, or non at all, you should still have a positive body image. Appearance should not matter, self image should be based on who you are as a person and learning to accept that person.

Issues with The Movement

I have no issues with having a positive image of oneself. I don’t believe in discrimination of any kind. No one should be turned down for a job because of size, shape, color or anything else. If you want to wear a bikini at the pool or beach, go for it, regardless of having loose skin, stretch marks, being too skinny or plus sized. It shouldn’t matter. No one has the right to shame anyone for the type of body they have.

However, let’s use some common sense.  Being morbidly obese, where your health suffers is not something positive and should not be promoted in any way. Just like we don’t celebrate being bulimic or anorexic. We, of course, should not shame anyone for being one or the other. Clearly these people need help. Whether you want to call them eating disorders or a disease, is irrelevant…There is a problem.

When I talk about being obese, I’m not referring to someone who is “thick” or curvy or plus sized in that way. You can be “thick,” curvy, full figured or plus sized and be perfectly healthy. Now, plus sized or full figured, generally means anything bigger/curvier than the stereotypical skinny, whip thin runway models or even more. So, there also is no hard and fast definition of this term.

It is also pretty difficult to tell a person’s health, just by size alone. There are many skinny/thin people who are unhealthy and conversely many with higher BMI’s (body mass index) who are very healthy. In other cases, it’s blatantly obvious. More on that in a minute. If you look at the pics above, you’ll see women who are curvy, plus sized or “thick.” These women, according to what they say, workout and eat healthy and could very well be healthy. You really can’t tell by just looking at them. Just like you can’t tell by looking at a thin/slim person.

These are just some examples, so don’t get triggered if you don’t look exactly like that. FYI, if you look closely you can see stretch marks on Denise Bidot’s stomach…and who cares. I have them also, along with acne scars and other imperfections. The stretch marks came from when I was obese (no longer). I was never  “plus sized,” just obese and unhealthy (I changed that). See, no excuses.

On the other hand, you have so called, “plus sized” models like Tess Holiday and Sonalee Rashatwar, who hide behind the body positivity and fat acceptance movements. Let’s be honest, you can definitely tell by looking at them, whether they’re healthy or not. Neither are full figured or curvy, just morbidly obese. I’m not trying to shame them, but when you’re a social media celebrity promoting yourself/brand, you’re open to critique.

If you’re gonna say “it’s none of your business whether they are obese…,” you’re full of crap. The same way you’ll say, that the rail thin runway models, and others with eating disorders, presents an unhealthy ridiculous unattainable image of what we should look like, so does the opposite end of the spectrum. It’s one thing to promote a healthy self image and body, quite another to promote obesity, which is what they and others like them do…whether that’s the intention or not.

Of course, Cosmopolitan (Tess on their cover) will say this is about promoting being comfortable in your own skin, no matter what you look like and not promoting obesity. Methinks this is more of an opportunity to capitalize on an emerging market, gain more readership, and to pander and placate the masses, more than anything else. 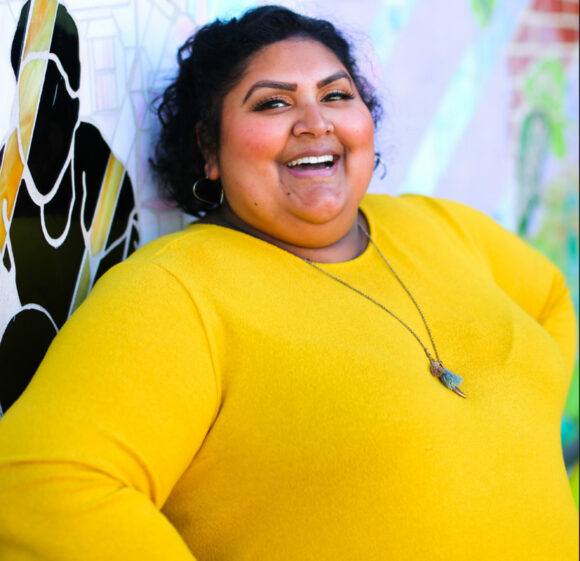 Both, Holiday and Rashatwar, also sell it as being comfortable in you own body, doing what makes you happy, and not promoting obesity. Say what you want, people, especially young kids who see this,  will be influenced by them and grow to accept obesity as being healthy. Here’s the thing, food addiction like drug addiction, or any other addiction is not positive. It is unhealthy and should be addressed, not celebrated (whether directly or indirectly). Stop pretending being 300+ lbs is healthy. So, no you can’t be fit and healthy with that size. And no, you can’t be healthy at every size. That’s just ridiculous. If either of them were rail thin and weighed 50 lbs, that would also be dangerous, and easy to judge as unhealthy, by just looking. Extremes are not healthy, period.

Holiday, Rashatwar and others like them will never lose the fat, not because it isn’t possible, but because it is their brand, and makes them a lot of money. Lose fat, get healthy and they lose their entire following and the money. FYI, Tess Holiday promotes body positivity, but unfollowed and shamed one of her fans, for posting before and after pics on Instagram after losing weight.

The follower did it, because her doctor said she had high cholesterol and blood pressure, and needed to lose the weight. Good for her, for choosing health over being sick. Ironic how some body positivity people, shame others for just being in shape and caring about their health. Wasn’t it supposed to be about positivity at any shape, size, color, etc…?

I actually don’t have issues with the body positivity movement itself, as long as obesity and being unhealthy is not something being celebrated, under the banner of fat acceptance or body positivity. I, 1000% agree that you should love yourself, no matter what. You should never shame anyone for their physical appearance, whether obese, skinny, scarred….To do so, is just bullying.

However don’t go around promoting being unhealthy as a good thing, and pretending that you can be healthy at 300+ lbs and 5 ft and a couple of inches. Cut the bulls*^t. Extremes in one direction or the other is not positive, It’s utter nonsense. I give props to those who keep it real and call out BS when they see it and not try to be politically correct.

Props to Michele McDaniel, and Alan Roberts from Every Damn Day Fitness, for calling out this nonsense on their youtube channels and other social media, despite the push back. I have no association with these people, but I like their content. I respect them for not trying to be politically correct and pandering to these body positivity abusers. They amongst others, agree with the fact that being positive, and loving yourself is a good thing. At the same time, they call out the people who hide behind body positivity and use it as an excuse to be unhealthy and make money from misguided followers.

Just focus on being healthy, which includes, eating healthy and exercising. Keep it real people, you cant improve if you won’t accept the truth about yourself!

18 thoughts on “Body Positivity, fat shaming-The Hijacking of a movement”