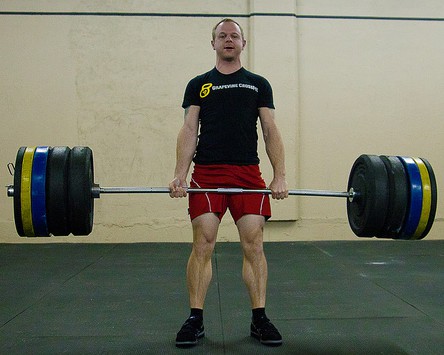 For the uninitiated…when the big guy in the corner of the gym leans over and picks up the bar whilst straightening up and then he leans over again and drops it back on the ground….that’s most likely a deadlift, or some variation thereof (either that or somebody has a few screws loose).  Sometimes called the “king of mass builders” only rivaled by barbell squats (there is some debate about which is the real king), deadlifts work both the upper and lower body. As far as whether squats or deadlifts are better, at this point who cares…you should be doing both, whether for strength training or bodybuilding. Anyway, back to deadlifts. So, what are the benefits of deadlifting?

Deadlifts work everything No joke. The primary muscle groups worked by deadlifts are the back and legs and the secondary muscle groups are in the stomach, arms and shoulders. Let’s break this down further

We can further subdivide this into stabilizers etc….but you get the point. This is a good all round exercise. The only part that is not worked is the chest (that’s why we bench press). So you can see that deadlifts strengthens many muscles which helps with other exercises.

Builds functional strength Yes it does. If you need to pick something up of the floor or move something from a shelf to the ground…you’re basically using your deadlift movements. Now you can do it safely because you’ve been practicing good deadlift  form (you should be) and you have the required strength.

Testosterone and GH levels? Hmmm…All the science shows that there is a temporary spike in these hormones, when big muscles are worked, as in compound exercises like deadlifts. No argument here. BUT, (always a but) does this temporary spike translate into better protein synthesis and muscle growth? The research says, it doesn’t [1, 2, 3].  C’mon you say, guys inject themselves all the time and get huge gains in muscle. Yeah sure, again, no argument here. But the amount of GH and testosterone produced, in the short lived spike period after lifting heavy weights, is small compared to what these muscle-heads use. Research also states, that resting levels are more important than exercise induced levels, which rapidly decreases shortly after a workout session. Okay so this one is not a benefit, but  a myth. I had to throw it in here, because so many people believe in this piece of broscience without any proof.

Helps with cardio Yes sir. Deadlifts taxes your cardio, just like squats. It will definitely help improve cardiovascular fitness. If you’re a treadmill junkie, try some deadlifts, a set of 8 or 10 reps and then tell me how you feel. Deadlifts will really get that heart rate going, and you’ll never go back to the treadmill.

Builds grip strength Yup, do it often enough…as the weights get heavier, your grip must be stronger to be able top pull the weight. So you’re forced to make an effort to squeeze and hold that grip. You’ll be able to crush people’s hands to dust when shaking hands…Well not really, but you will have a strong grip.

Helps with bad posture Bad posture usually results from weak (lazy) lower back muscles and core. Deadlifts strengthens the lower back and core which can help with good posture.

How to do a deadlift?

Deadlifts start with the bar on the floor. To practice the form, add plates to the bar. This is an exercise that you can’t really practice without plates on the bar.

Step 1 Start by standing with your shins almost touching the bar. Feet should be shoulder width apart and turned outward slightly. The bar should be just above the center of your feet (if your feet are 10 inches long, bar should be over the 5 inch point). 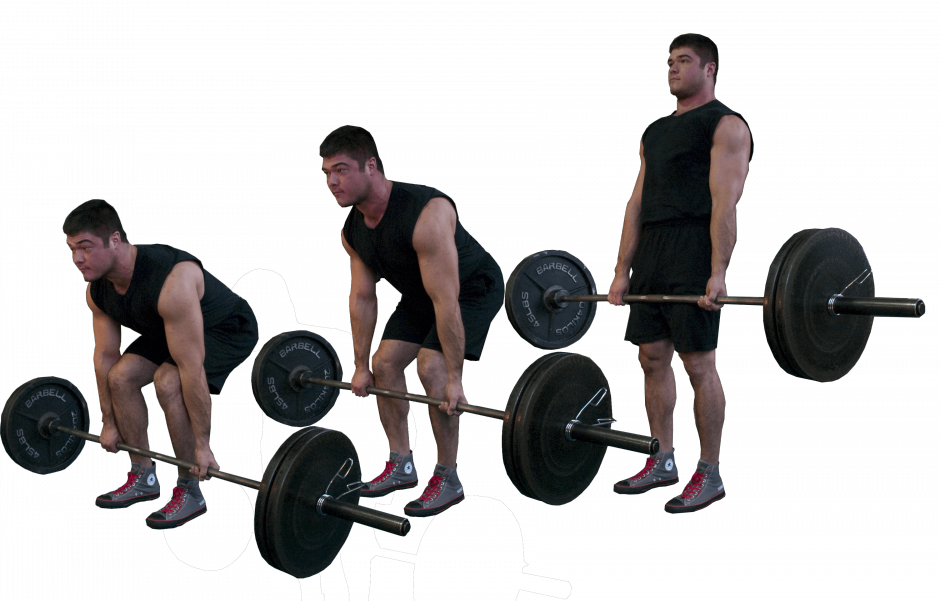 Step 2 Keeping your back upright, bend your knees until your shins touch the bar.

Step 3 Keep your back neutral (flat), hinge forward at the hips and grasp the bar with both hands (just outside your legs). Use either, overhand or mixed  grip, whichever is preferable to you. Mixed is simply one hand overhand and the other underhand.

Step 4 Lift your chest and keep the back and head neutral. Grip the bar and take the slack out of it.

Step 5 Take a deep breath and hold it. Pull the bar whilst standing up straight. Exhale slowly as you past your sticking point. Lock out the knees and hips as you straighten up.  Breathe in again at the top.

Step 6 Lower the bar whilst hinging forward at the hips and bending the knees again. Hold your breath as you lower the bar and exhale at the end of the movement.  DO NOT let the bar bounce. Let it come to a dead stop and pull again.

Deadlifts are an excellent all round exercise for your body due to the many muscles worked. Don’t waste time chasing after hormonal spikes (GH and testosterone), which does nothing for muscle growth. Go after good form, poundage and intensity ,which will make you stronger and help with building muscle. If you’re not doing this exercise, you need to add it to your routine now. Don’t forget to like The Healthy Goat and friend on facebook.

P.S. The healthy goat was spotted in Queens transporting heavy boxes from a moving truck to a nearby warehouse (Despite not being asked to). People were impressed with his strength and the ease with which he could move the boxes (due to heavy deadlifting).

Update: The contrite goat was last seen being chased by a truck full of angry movers. It took the movers 2 hrs to pack and move the boxes into the truck… Silly goat.

Photo of Travis Isaccs used under a CC BY 2.0 license

12 thoughts on “What are the benefits of deadlifting?”