Did you miss me? I haven’t written anything in the last 2 weeks. I was distracted by a few things, and couldn’t get to it. Sorry. Now, I’m back with a little piece on Turmeric and it’s side effects (if there are any). People rave about the benefits of it, but as we know, things are always a little more complicated than we originally think. So, let’s do a little digging and see if we can uncover the truth about turmeric and how beneficial it really is.

What it is Turmeric and how can it help

What is Turmeric? Popularly known as the main spice in curry, Turmeric comes from the Curcuma Longa plant. This is a perennial herbaceous plant which is part of the ginger family. Tu 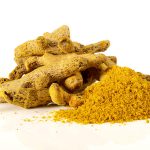 rmeric has been used for centuries as a dye, spice in food and for medicinal purposes. Turmeric powder is yellowish in hue which gives us that distinct color in curry. By far, the largest producer of turmeric is India, followed by Thailand and other Southeast Asian countries. Just so you know, the active ingredient in turmeric, which provides all the benefits, is curcumin. So, when you read about it in the rest of the article, you know what it is. Okay, now on to the benefits.

Fights cancer Well, we talked about the anti-inflammatory benefits previously. This also comes into play with fighting cancer. Research has shown that curcumin suppresses tumor formation and spreading, and can be used to help prevent and treat cancer [4, 5, 6]. This is accomplished by it’s ability to affect tumor cell growth by controlling multiple cell signaling pathways. These pathways include, cell proliferation, cell survival, caspase activation (enzymes that play a role in programmed cell death), tumor suppression, amongst others [7]. It begs the question, why does curcumin affect tumor cells and not normal cells. The reason for this is not fully known, but it is believed that it is due to, higher uptake in the tumor cells compared to regular cells, tumor cells are more sensitive to it’s effects (because of lower glutathione levels) and NF-κB (produced by tumor cells only) which regulates survival, is suppressed by curcumin. 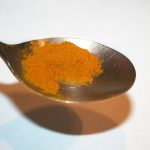 Helps with Arthritis This one is kinda obvious, if you read the preceding paragraphs…it’s anti-inflammatory. Studies have confirmed that curcumin possesses anti-arthritic and anti-inflammatory properties. The ability to relieve effects of rheumatoid arthritis have been shown in both rat and human studies [8, 9, 10]. Again research has shown that NF-κB and the expression of NF-κB–regulated genes, which mediate joint inflammation and destruction, are suppressed due to treatment with curcumin extract. Most of the research done, were small scale studies, which are useful for demonstrating, that their are benefits. More studies, across a bigger population need to be performed, to provide more definitive proof of the effects of curcumin on arthritis, as well as a better understanding of the mechanisms involved.

Benefits for Alzheimer’s Studies in rats, both in-vivo and in-vitro, have shown that curcumin or curcumin extract, can reduce or inhibit plaque formation and neuro-inflammation associated with Alzheimer’s [11, 12, 13]. Now, this is not definitive by any means, I’m not saying to go out and treat Alzheimer’s with curry. Successful human trials need to be performed and there is a ton of more thorough studies needed, before we can use curcumin in the treatment of Alzheimer’s. But, it does show promise as a potential treatment for the disease.

Effectiveness of Turmeric in food

It’s all well and good to show the effectiveness of tumeric/curcumin in laboratory studies, but does dietary quantities of turmeric/curcumin provide any benefit? You see, pure turmeric powder has a curcumin conte

nt of about 3% by weight. This according to a 2006 study of 28 different spices labeled as turmeric or curry [14]. The problem with curcumin in general, is that it is rapidly metabolized in liver and intestinal wall. It generally has very poor bioavailability, and as you can imagine, with only a 3% concentration, there isn’t much benefit when consuming it as a food. Now, you can buy curcumin supplements, which are more concentrated and could provide all the anti-inflammatory and other benefits mentioned earlier. However, if you do not wish to dig into your pockets, try combining with piperine.

Huh? What are you talking about? another expensive supplement…gimme a break. Relax, you can get piperine in black pepper. It helps to increase the bioavailability of nutrients in the body. The mechanism by which this occurs, will not be discussed here. In one study, after ingestion of 2 g of curcumin, it was either undetectable or very low in the human body. However, when the same dose was administered with just 20 mg of piperine, the bioavailability was increased by 2000% (yes, it can be more than 100%…don’t ask). The take away here is that piperine or black pepper, helps increase the bioavailability of nutrients making them more effective.

Okay what about the side effects? With high concentrations of Turmeric, there have been reports of nausea, diarrhea, hypotension and bleeding (if used with blood thinners). There isn’t much study on the toxicity of turmeric, and as stated, these are reported side effects. Normal everyday dietary consumption seems to be safe. If you are using a supplement, maybe you should talk to your doctor, especially if you already use blood thinners or notice any adverse effects as stated earlier.

Summary There you have it folks, the good, the bad, and the not so bad. Really, there doesn’t seem to be any downside to consuming turmeric. Just be careful if using curcumin supplements or turmeric supplements with high concentrations of turmeric. For dietary considerations, you might want to consume turmeric with a little black pepper to increase it’s effectiveness and availability in the body. You can even make a tea using black pepper and turmeric. Might not be the best tasting concoction in the world, but hey, you can’t have everything your way. Don’t forget to share this article, so everyone can be as well informed as you.

6 thoughts on “Turmeric Benefits and Side Effects”