Sometimes you go to gym and you do a little workout (lift weights, cardio, run on the treadmill…) and when you’re done, head 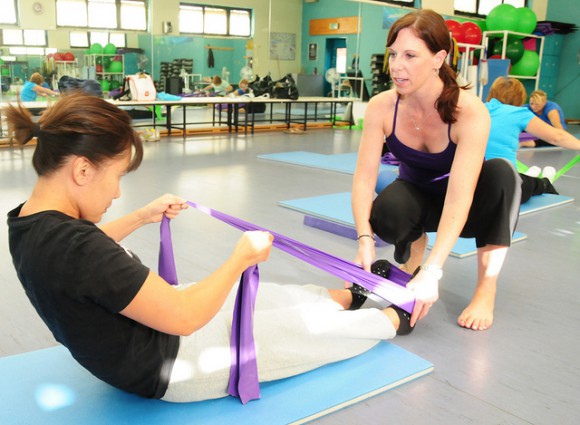 over to a dedicated area for stretching. Most of the times you halfheartedly do some stretches wondering what all those pieces of elastic are for and who the hell uses them. Then you scurry away, to the coffee shop, for your morning latte (which has a ton of calories…FYI). Can’t help with the morning Joe, but I can tell you what to do with those pieces of elastic (resistance bands). You’d be surprised at the kind of workout you can get with them, if you know how to use them. Let’s look at some great resistance band exercises. I encourage to try them out and tell me how they feel.

across your shoulder and loop it around your hands, as

you assume the push-up position. You can either use the band or the one that looks like a tube as shown in the pic. Make sure it is taut as you start with your elbows straight and hands on the floor. The rest is what you already know in terms of doing a push-up. Try a couple and shoot for 3 or 4 sets of 10-15. Let’s see what you’ve got.

Squat press You will notice a trend as we move along. A lot of these exercises are very simple and involve just the addition of some resistance with the band or tube…nothing overly complicated. Same with squat press. Place your feet about shoulder width apart whilst standing in the middle of the resistance band. Hold the band up on your shoulders and keeping it taut from the squat position and stand up. Now, stretch your hands straight up and lower them again and squat. As you squat, remember to control your movement down and not let the band pull you down.

Off course you can definitely break this movement up and just squat or shoulder press. Whatever works for you. It’s a great way to get both an upper and lower body workout in one go. Definitely a time saver if you’re in a rush. Try a few and if it’s too much, then just do them separately until you can work up to the complete exercise.

Side step with/without squat A little variation on the squat. We’re adding a side step which has resistance, but not the squat itself. Trust me, you will feel this one. It’ll give your butt and thighs a great workout. Even without the squats, it’ll be a chalenge. Looks easy but it isn’t. Try it…go ahead…I dare you. Click on the image to see how it’s done.

Standing bicep curl Similar to the set up for the squat. Stand on top of the band or tube, hold the the handles or ends of the band. No simply perform the curl with elbows stuck to your sides. Great exercise for your biceps, if you don’t have dumbbells at home or don’t feel like going to the gym.

Seated rows This exercise works primarily the middle back and has some benefits for the biceps, lats and shoulders. Sit in an L-shape with legs extended. Wrap the resistance band across the bottom of your shoes or feet. Hold on to the ends and pull towards your torso and extend again. Keep the back straight throughout the motion. In the video below, you will find 2 versions of this, the 2nd is a little bonus for you. Check it out.

Upright rows The set up for this is similar to the one for bicep curls. The difference being, you hold the band towards the center of your torso and pull up. In the video the band is in the form of a loop. It doesn’t matter, if yours are open, just hold the ends in your hands. This works both the traps and shoulders.


Chest press Wrap the band around your upper back. Make sure it is taut as you hold the ends in your hands, which should be positioned at chest level. Push out away from your chest as if doing a bench press or push-up. Bring the hands back to the chest in a controlled smooth movement. You can do this standing or lying on your back. Very similar to the resistance band push-up.

, or the tubular ones with handles here

. Try them, they’re inexpensive, ranging from about $10 -$25 bucks. They take up barely any room and are the very definition of portable.

P.S. The Healthy Goat is currently on the lam…He was spotted running away from the set of the “biggest loser” tv show. Producers and management didn’t appreciate his plan to use resistance bands to slingshot eggs and tubs of fat at them. The Healthy Goat is not a fan of ridiculous garbage exercise and fitness programs that endanger the lives of people whilst profiting from it.

Image of push-up from lushiouslifts.com under a CC BY-NC-ND 4.0 license

Image of side step from lushiouslift.com under a CC BY-NC-ND 4.0 license

6 thoughts on “Resistance band exercises for you”