That’s the million dollar question. First we must understand how they are created and what happens to fat cells when we ingest excess calories. The how part of the equation comes later on.

Fat cells, known as adipocytes, are generally thought to increase mostly during puberty and pregnancy. Other than that, once we reach adulthood the number remains constant. Research done by  Swedish scientists, in 2008, supports this and states that whilst fat cells  die, new cells replace them making the net change zero. In other words, losing or gaining fat results from increasing or decreasing the size of the fat cells. Just like a balloon becomes larger with more air and shrinks as air is let out, so does adipocytes as more fat is stored or released. The type of obesity resulting fro 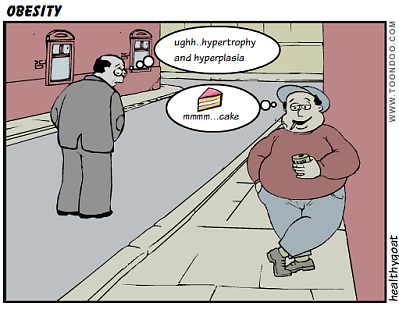 m an increase in volume of the adipocyte is called hypertrophy. Now this is what the conventional wisdom has thought us. However, further research shows there is more to the story. When obesity becomes more severe, the net number of adipocytes increases and is called hyperplasia.

So whilst it’s generally true that in adulthood the number of fat cells is constant, for severely obese people, both the size and number of cells increases. Unfortunately there is no research that shows the opposite is true. As you lose weight due to fat loss, the cells shrink but the number does not change, whether you’re as lean as a stringbean or as obese as “Fat Albert” (hey-hey-hey…choke…ughhh…heart attack).

What about liposuction?…. well, what about it? In this case the fat cells are destroyed as they are sucked out of the body. This means there is an overall net reduction in the number of cells. But, (there is always a but) if the reasons for gaining the excess pounds, in the first place, are not addressed, then remaining cells will swell up like a balloon to accommodate the extra fat. And as mentioned before, if you become grossly obese, they will divide to make new cells. So forget about shortcuts and don’t waste your money.

Okay, okay, so what the hell do I do to shrink these damn fat cells? Look you’ve heard it time and time again…diet and exercise…especially diet. Reduce the amount of simple carbs like white bread, pasta, and flour and limit your sugar intake. No soda, fruit juices or alcohol…or at least greatly limit their intake. Yes, fruit and fruit juices have sugar. But this is natural sugar you say…Listen, sugar is sugar… natural or otherwise. Fats are still good as long as they are unsaturated fats.

Having said that here are a few tips and tricks to help you shrink fat cells:

These are a few things that can help with your fat loss and improved health. More will be added in the future. At the end of the day, none of this information is useful unless you act on what you know. As you go along, you can replace and modify exercises and diet to see which combinations works best for you. Do it gradually, this is not a race. But the key is to ACT.

P.S. The healthy goat was last seen at the RPAC gym in OSU eating a cup of blueberries. He was working on his diet and exercise. The exercise part came whilst he was being chased by campus police….He “forgot” to pay for the blueberries.

6 thoughts on “How to shrink fat cells?”