Cupping? I know, lately I’ve been writing about healing and recuperating. Cupping has been around since ancient times, in many different cultures. China, Middle East, India, America (Native Americans)…I keep coming across alternative healing these days, due to the latest set of training injuries I’ve had. So, people I know, have been suggesting different things (Epsom salt soak, acupuncture, cupping) for me to try. I thought I’d do a little piece on cupping, especially since it came up during the Rio Olympics. You had a bunch of swimmers with tell tale circular bruises on their backs, most noticeably, Phelps . It’s either cupping or a hicky from a very friendly octopus. But, I think it’s the former, at least that’s what they claim. So, what the hell is cupping? Let’s get into it then, and find out.

What is cupping? Cupping involves placing cups, usually made of glass on certain points, typically on a person’s back or other injured area. When the glass is heated and pla 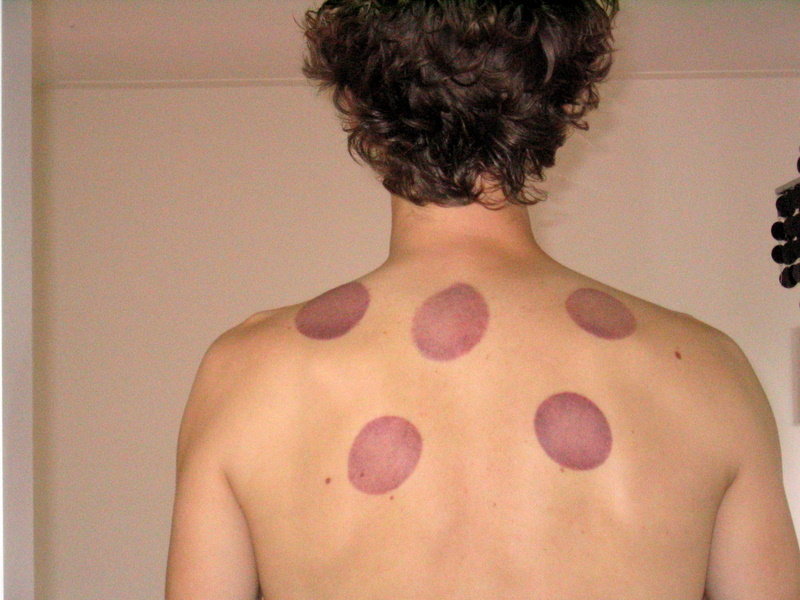 ced on the skin, as it cools, it creates a suction and lifts that skin into the glass. Suction can also be created by using a pump. So, it is kinda like a hicky. Just with an inanimate object.

Wet cupping involves, making superficial incisions on the skin and then placing the cup and creating the vacuum. This results in blood being drawn out of the skin and not just the mere breaking of blood capillaries à la hicky style. The supposed benefits include, pulling toxins out of the body and improving healing, by removing stagnant blood and oxygenating the cupping site/injured area.

Does cupping work? It depends on who you ask. There is a dearth of reliable scientific data on this type of treatment. Anything published, usually comes out of China, and not in any reputable peer reviewed science journal. Cupping usually precedes or follows some sort of massage therapy which confounds the issue.

It has been shown in several studies that massage has the ability to reduce pain and help with healing [1]. I won’t provide any scientific details on how massage works, at least not here, you can do that as homework. So it begs the question…is it cupping or the massage that really provide the benefits? Some people like to point out that cupping is thousands of years old, as a testimony to how effective it is. “It’s been around since ancient times.” They say. I say, so what? Stupidity and ignorance have been around since ancient times also, does that mean they should be accepted, or is useful? C’mon, you have to do better than that. I expect that kinda of illogical logic from Hollywood celebrities…Oh, wait, that’s where that came from. 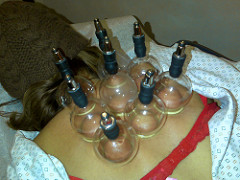 In one study done on people suffering with fibromyalgia (characterized by chronic widespread pain, fatigue, depression, cognitive disturbances and sleep disturbances, etc.), patients were divided into two groups. One group received the cupping treatment and another received a sham treatment. The sham treatment consisted of placing cups on the back without creating the vacuum. The result was that, there was a significant reduction in pain experienced by the cupping patients [2]. Here’s the kicker, there was also a significant and equal improvement in the patients receiving the sham treatment.

But, there are many anecdotal accounts, not just by recipients, but also health care professionals (actual doctors with medical degrees), who swear by it. They can’t explain why it works, all they know is that it works. Here’s an excerpt from an article on Thrillist, which reports on the views of a physical therapist (Marcus Williams) at The Ohio State University Medical Center:

“It increases blood flow, can reduce muscle tension, and allows athletes or patients to feel improvements in their range of motion…..He adds that while cupping lacks clinical evidence, there are basically three theories to explain why athletes and other people seek it as a form of treatment: it increases blood flow to a local area; the tensile force of stretching the skin helps dull pain signals being sent to the brain; and hormones, like endorphins, are released to help heal the area.”

You can read the full article here. As I said before, there are other health professionals, including board certified doctors, who give similar statements. It works, people see improvement in pain reduction and healing, but they can’t explain why.

Verdict This is hard to say. The studies that show benefits, are not published in any reputable scientific journals, and the one somewhat scientific study that I could find, showed both the cupping and placebo treatment working. Cupping is not the most expensive of treatments, so if you wanted to give it a go….well…go ahead. There have been no reported side effects (besides people staring at your octopus hicky) and is generally considered safe.

There definitely needs to be more rigorous research to asses both short term and long term effects of this treatment. If you’ve done cupping, please write in and comment on what your experience was like. I would love to hear your thoughts on it and if you find a scientific study, published in a peer reviewed journal, on the matter, please send me the link. I’d love to look at the evidence and learn something new. Don’t forget to bookmark this site and keep coming back for more. Like and share on social media, so everyone can benefit from the information provided here.

6 thoughts on “What is cupping?”